Liverpool have bounced back from their defeat to Burnley in style with a crushing defeat of Championship side Burton Albion in the second round of the EFL Cup. Although the result was expected, such a dominant performance will give the fans and players alike a much needed confident boost before the tough run of features that lays ahead. 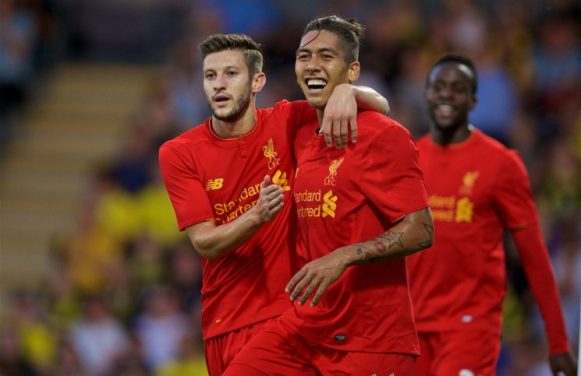 Simon Mignolet – 7: Mignolet would’ve certainly been rated higher if he was tested more often by the opposition. His first significant involvement didn’t come until nearly an hour into the game, but he looked relatively comfortable clearing crosses and corners regardless of the limited pressure from the opposition. A couple of wayward clearances and passes with his feet were the only blemishes on his quiet game.

Nathaniel Clyne – 8: A welcome return to form from arguably the player of the season last year. Clyne was a constant threat operating on the right flank with some dangerous runs and crosses complimented by solid defensive work. An excellent time for Clyne to rebuild his confidence given the tough run of fixtures ahead, he also chipped in with a lovely assist for Firmino in the first half.

Joel Matip – 8: Making his competitive debut for the Reds, the towering Cameroonian cut a dominating and imposing figure. He dealt with his defensive duties with ease, and was confident enough to make a few marauding runs into the midfield and beyond. His passing was also on point, many will be looking forward to seeing him in the Premier League and seeing how his roaming style develops and adapts against tougher opposition.

Dejan Lovren – 7: An early penalty scare was quickly forgotten as Lovren left his naive challenge behind him to press on with his role, following this moment Lovren was as solid as anyone at the back. However it must be said that the attacking threat of the opposition, dropped off as the game progressed with Nigel Clough thinking ahead to the Brewers’ crunch game against Derby. Nevertheless, a much better performance from the Croat who will be looking to develop a partnership with Matip.

James Milner – 8: Another improved performance from the weekend saw Milner consistently terrorising the left flank and displaying much more consistent deliveries with his weaker left foot. His movement and vision in the build up to his assist was wonderful, Klopp and the fans will be wanting to see more of this from the experienced England international.

Jordan Henderson – 5: Another worrying performance from the Liverpool captain who is struggling badly thus far this season. Whether it’s a crisis of confidence, niggling injuries or he’s feeling the pressure is unclear; either way he needs to improve, quickly. Some sloppy touches and woeful passes summed up his afternoon, although to his credit some of the passes that didn’t come off demonstrated ambitious vision, even if the technique was lacking.

Emre Can – 7: In his first start of the season Can demonstrated all his qualities that have endeared him to the Liverpool fans and to the manager. Some excellent work in the middle of the pitch breaking up play and some trademark driving runs cemented his return. He would’ve been disappointed to have not been more involved in and around Burton Albion’s box but considering he didn’t have a preseason it was a good performance. Worryingly, he limped off with an injury, but thankfully Klopp seems to think that it is not a serious one, though it remains to be seen if he will start against Tottenham.

Adam Lallana – 6: Similar to Henderson in that he was unable to link-up with his teammates effectively. He, seemed to be consistently on a different page to the other attacking players at times, and frustratingly slowed down every attack that came through him with a number of unnecessary touches. However unlike Henderson he did influence the game somewhat with some encouraging runs. Having said that, he possibly could’ve used a rest instead of playing for an hour.

Roberto Firmino – 8: Thankfully Firmino was another player who regained his form and took his goal very well. Consistently linked up well with Milner and Origi, demonstrating excellent movement, vision and technique. This lead to a few chances that on another day could’ve seen Firmino score one or two more. Hopefully the sign of good things to come from last season’s top goal scorer.

Sadio Mane – 9 (Man of the Match): Most Liverpool supporters would’ve been thrilled to see Mane’s name on the team sheet after such a short period of time off after what was initially thought to be a serious injury. His presence was sorely missed at Burnley and it was a relief to see him picking up from where he left off. He was a constant menace on the right flank displaying tremendous pace and technique to regularly get around or inside defenders. His assist for Sturridge’s second was a perfect example of this, looking like an excellent signing already.

Divock Origi – 8: The young striker played a very good game, bouncing back from a couple of missed chances early with a clever finish to give Liverpool the lead. His movement and desire was plainly evident, this was a huge asset to the Reds upfront. Throughout the game he showed an impressive work rate and effective pressing, this lead to him coming off late for treatment on cramp. Hopefully this won’t be too big an issue and he will be available for the trip to White Hart Lane.

Daniel Sturridge- 8: Came on and made an immediate impact, scoring two excellent goals that were expertly finished. The fans will be hoping he can have a similar impact against Spurs.

Georginio Wijnaldum – 5: Another disappointing performance by Wijnaldum unfortunately, despite being subbed on when the opposition were faltering he still managed to drift out of the game. Burton Albion were well and truly there for the taking when he was subbed on and yet he didn’t seem confident or bothered enough to press on and try and add to the tally.

Kevin Stewart – 6: Didn’t see too much of the ball due to coming on late, well after the game was settled. However he still put in a a good shift, even managing to make an important block late in the game. Klopp really seems to like and trust the young midfielder.

Jurgen Klopp – 8: Many were surprised to see Klopp play a near-full strength side against Burton Albion in only the second round of the EFL Cup. However it payed dividends by providing the fans and players with a desperately needed confidence boost. This will undoubtedly assist in team cohesion and link-up play. It was clear that Klopp also did his homework on Burton Albion’s formation and style, showing great respect for both the opposition and competition. Although I do think that it would’ve been a good chance to rest Lallana and Henderson, if this result gives the squad a boost for the upcoming games then it will all be worth it.

The benefits of playing a full strength side have already been discussed. However there are also some potential pit falls. The first and most obvious ones are fatigue and injury, Can and Origi went off with injuries, Origi’s seemed to be only cramp, but Can’s could be more serious. It seemed to be a recurrence of a niggling ankle injury from last season, but hopefully it looked worse than it actually is. If Can misses the Tottenham game, then Liverpool could be in serious trouble in the midfield as Henderson and Wijnaldum have both failed to impress in their performances this season.

It should be seen as no coincidence that Liverpool have scored nine goals in the two games that Mane has played in, and none in the game that he didn’t. His direct style complimented by his immense speed seems to be the key to getting the best out of the likes of Coutinho, Firmino, Origi and Sturridge. If Liverpool are to have a good season, it is clear that Mane will play a major role in any success.

With all due respect to Burton Albion, a comfortable win for Liverpool was to be expected. The upcoming run of fixtures however, will be exceedingly more unpredictable and difficult. After Tottenham away comes Liverpool’s first home game of the season against reigning champions Leicester, followed by another away game at Chelsea. The result against Burnley was disappointing, but if the Reds can make it through the next three games and still be in touch with the top four, then there is no reason that they can’t go on a good run of results. The challenge beings Saturday.