Disappointing Defeat for Reds Against the Old Enemy

Liverpool fans were left devastated by the result and poor performance at Old Trafford, as Marcus Rashford and Romelu Lukaku exposed both Trent Alexander-Arnold and Dejan Lovren.

Jose Mourinho, for all of his faults, again demonstrated why he is considered one of the very best managers of his generation as he put on a tactical masterclass.

Both of United’s goals come from route one football that was woefully dealt with by the Liverpool defence, and despite some poor refereeing and a couple of strong penalty shouts, Liverpool have no one to blame but themselves. 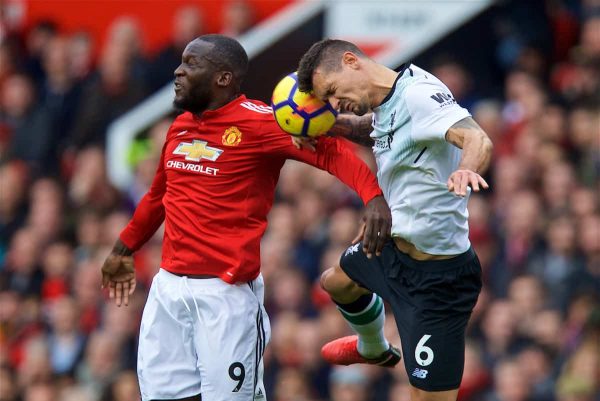 Karius could do nothing about either of Rashford’s well-taken goals, and was virtually untested for the rest of the game.

He wanted to come forward for a corner late in the game, but was oddly ushered back by Jurgen Klopp.

In games like these, it’s important to keep context in mind, TAA is a young player who is naturally a midfielder; he also didn’t receive the help he needed from those around him.

However, it is undeniable that his inexperience showed as Rashford targeted him successfully.

Oh dear, he’s back, the old Lovren is back.

Unlike TAA, Lovren is an experienced player in his natural position, and despite spending all week talking about how he was going to manhandle Lukaku, he was embarrassed by the Belgian regularly.

VVD didn’t fare much better than his partner, but he did improve and was more comfortable after floundering under United’s initial wave.

He unbelievably missed a free header from only a couple of yards in the first-half, but was better at handling Lukaku; it’s a mystery why Klopp didn’t have him doing this from the start.

It’s a testament to his form that Mourinho avoided his flank for most of the night.

Robbo couldn’t do anything about the goals and was able to whip in a few dangerous crosses, but no one was alert enough to get on the end of them.

Despite what some have argued, Can was another who had a poor day at the office.

He was outmuscled by Lukaku and then simply gave up for United’s second goal; he also almost allowed them to score a third when he didn’t track the run of Juan Mata.

Milner’s tried and worked hard, but he couldn’t do enough to turn the game around for his team.

He looked one of the more likely players to create something as he drove the team forward and kept finding runners with his passes.

It’s bizarre that a player that had been so influential in the last few weeks could become so anonymous overnight; his constant mishandling of possession drew the fury of Klopp.

It’s difficult to criticise the Egyptian after such a fine debut season, and the fact that he was completely marked out of the game.

Mourinho knew that keeping Salah under wraps would be key to winning and both Nemanja Matic and Eric Bailley did just that to perfection.

The fact that United focused so heavily on Salah meant that Mane was afforded far more time and space than he normally would against such a defensive team; unfortunately, he did nothing with i1t.

He gave the ball away countless times, and despite an improved second-half, he rarely looked dangerous.

The best of the worst might be a more accurate description.

Firmino did everything to drag his team over the line, but no one else seemed to show the same desire and fight as the Brazilian.

Lallana is still a long way off from getting back to his best.

He tried hard to unlock the defence, but he just doesn’t look the same players as he was before the injury.

Club captain Jordan Henderson neither started, nor came on as a substitute; whether this is because he’s fallen out of favour, or was simply unfit remains to be seen.

In his place, Gini came on, but couldn’t change the result.

It’s concerning that The Reds have to turn to an u23s striker with no EPL goals to his name to try and grab the winner at Old Trafford.

The youngster did nothing wrong, but having a decent winger or an experienced striker on the bench may have given Liverpool a better chance of stealing a result.

Team selection was not an issue, even though in hindsight Lovren and TAA were poor, they were in excellent form in the buildup.

However, it is clear that Klopp should’ve had VVD marking Lukaku, and not the dodgy Croatian, if VVD won the headers that Lovren missed, then United would never have scored their goals.

Ultimately though, it was the players who let Klopp down, and he will need to pick them up in order to finish the season on a high.

In my preview, I predicted a comfortable win for the better team, Liverpool.

In reality, United were the deserved victors and really should’ve won by more in the end, despite being bailed out by some poor refereeing.

Does this result mean that United are in fact the better team? I don’t think so. Liverpool will use this experience and come back stronger; Liverpool are a club on the rise whereas United are declining.

This is a young team that hasn’t been together very long, and games like these will only benefit them in the long run.

Klopp too will have surely learnt something about his own team from the opposition, as much as Lovren and TAA were at fault for the goals, under Klopp’s system it is not too difficult to isolate individuals and force errors.

It’s clear that there are still holes in this squad and that certain players are, at least not yet, at the standard that Liverpool need.

It’s not all doom and gloom though, Liverpool fought back valiantly where in years gone by United could’ve on to score two or three more.

Liverpool must now move on from the game and use it to go on another good run of form as they did after the defeats against Tottenham and Swansea earlier in the season.

As much as all Liverpool fans are disappointed, it’s important to keep things in perspective and remain behind the team.