Potential Game of the Season at Anfield

The countdown begins. This is a fixture that both sets of fans have been eagerly awaiting since the end of last season. Ultimately, it could be a decisive moment in the title race.

Liverpool’s form is poor coming into this one: two losses and a draw in their last three. However, City are yet to hit top gear this season either despite some flattering scorelines.

Both sides will be hoping to assert their dominance in this match and make a real statement to the rest of the league.

Despite the fact that Jurgen Klopp confirmed that Naby Keita’s midweek injury was not too serious, the midfielder is still unlikely to feature in this match.

Keita is the only injury concern going into the game; however, Klopp’s men will be undoubtedly tired as the German isn’t blessed with the extensive rotational options that his Spanish counterpart has.

It’s difficult to imagine that the likes of Xherdan Shaqiri, Daniel Sturridge or Fabinho will be given the chance to start this match due to its importance. 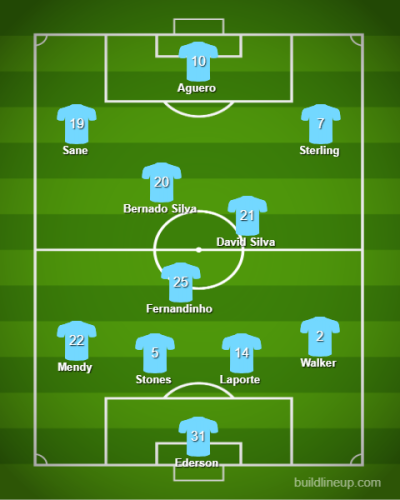 Pep Guardiola hinted that Benjamin Mendy and Kevin de Bruyne may return from injury in time to feature at Anfield.

Mendy is the more likely of the two to start, considering the only real alternative would be to throw young Oleksandr Zinchenko to the wolves. KDB is probably not worth risking considering he has mysteriously returned from a three month injury after only three weeks.

However, City have many options in most posistions and their lineup is always difficult to predict. Nicolas Otamendi, Vincent Kompany, and Gabriel Jesus are just a few of the world class options they could chose to employ.

City will surely enter the match as favourites, but then again, no manager in world football has bested Guardiola more often than Klopp.

Some pundits have suggested that if Liverpool in their current form are going to walk away with a result, then we’ll have to adopt a more conservative approach in this game. This is nonsense. If we’re going to win, we’re going to do it our way.

City aren’t going to change their approach despite what happened last season, and they;ll be better for it. An analysis of a game of this nature is basically redundant given the chaotic nature of the previous encounters.

Who would be brave enough to bet on this one? Who knows what Liverpool team will turn out at Anfield, and with the quality of City’s players will it even matter?

My head says City will be too strong for us in this moment, but my heart says this is the perfect game for our front three to remind the league that last season wasn’t just a flash in the pan.

I’m optimistically predicting a 2-2 draw, but honestly, anything could happen.

One thought on “Liverpool vs Manchester City”