Liverpool take on Unai Emery’s Newcastle at Anfield in our final game of what’s been a wonderful 2018.

Ordinarily, Arsenal, even at Anfield, is far from a guaranteed result and the Gunners have always had the quality to hurt us. But in the context of how well our season’s going, then nothing other than a win in this match can be accepted.

Having said that, Liverpool still can’t afford to approach the game lightly, as Arsenal will feel like they could’ve won the first game earlier in the season and will be looking to rectify that. 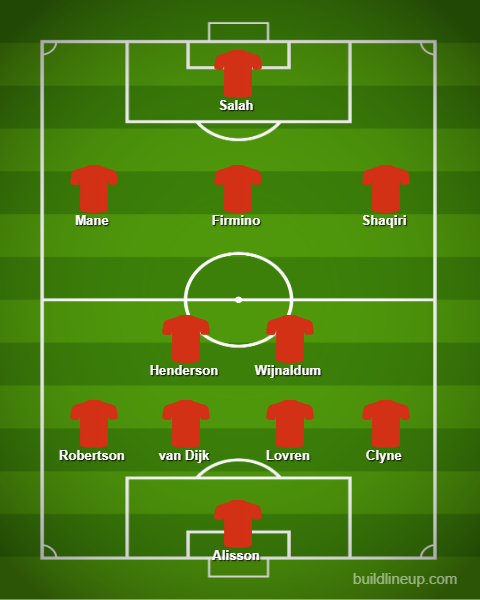 Milner will be unavailable for Arsenal, as will the long-term injured players, though Alberto Moreno has trained pain-free and is back in contention.

Hendo and Gini could be joined by Fabinho in the central midfield three, though Keita and – perhaps less likely – Lallana are options in the engine room. Shaqiri would be unfortunate to miss out after his performance on Boxing Day but would seem the likely fall guy if Klopp ditches the 4-2-3-1.

Salah, Mane, and Firmino have started in all of the meetings against the “big six” sides this season. The back four are set to remain unchanged given the magnitude of the fixture, though Clyne and Moreno are fresh legs in the fullback positions if needed.

Emery reported on Thursday that Shkodran Mustafi  had trained alone with “good feeling” and was close to joining the rest of the squad ahead of the Liverpool match, though Laurent Koscielny is the latest injury doubt at centre-back after picking up a knock in the draw with Brighton.

No update was given on Nacho Monreal (muscle), who also remains a concern for the trip to Anfield. Emery may play all three of Granit Xhaka, Lucas Torreira and Matteo Guendouzi in central midfield to give his backline extra protection for this daunting fixture, while Mesut Ozil looks a strong bet to drop out of the starting XI after a limp showing at the Amex.

Alexandre Lacazette could again be paired alongside Pierre-Emerick Aubameyang in attack, though his manager may instead decide to plump for Alex Iwobi or Aaron Ramsey in behind the Gabonese forward for this encounter. Ainsley Maitland-Niles could be used at right wing-back given the dearth of alternatives available, meanwhile.

Klopp deployed a 4-2-3-1 in the win over Newcastle but highlighted the defensive problems that the system brings, so may switch back to a 4-3-3 for the visit of free-scoring Arsenal.

Emery will stick with his 4-2-3-1 meaning Lacazette will remain on the bench as he won’t want to risk going too top heavy against Liverpool’s superior midfield.

Arsenal will need to sit back, frustrate the Reds, and hope that their forwards are clinical enough to take what few chances will come their way and that their defenders are strong enough to hold on.

Both teams will come flying out of the gates as it’s a significant match in both sides’ season, Liverpool with the title, and Arsenal with the top four.

Liverpool have a significant advantage in the strength of our midfield, and being at home, this issue will be even further highlighted. This is where the game will ultimately be won and lost.