Liverpool take on Unai Emery’s Newcastle at Anfield in our final game of what’s been a wonderful 2018.

Ordinarily, Arsenal, even at Anfield, is far from a guaranteed result and the Gunners have always had the quality to hurt us. But in the context of how well our season’s going, then nothing other than a win in this match can be accepted.

Having said that, Liverpool still can’t afford to approach the game lightly, as Arsenal will feel like they could’ve won the first game earlier in the season and will be looking to rectify that.

Milner will be unavailable for Arsenal, as will the long-term injured players, though Alberto Moreno has trained pain-free and is back in contention.

Hendo and Gini could be joined by Fabinho in the central midfield three, though Keita and – perhaps less likely – Lallana are options in the engine room. Shaqiri would be unfortunate to miss out after his performance on Boxing Day but would seem the likely fall guy if Klopp ditches the 4-2-3-1.

Salah, Mane, and Firmino have started in all of the meetings against the “big six” sides this season. The back four are set to remain unchanged given the magnitude of the fixture, though Clyne and Moreno are fresh legs in the fullback positions if needed.

Emery reported on Thursday that Shkodran Mustafi  had trained alone with “good feeling” and was close to joining the rest of the squad ahead of the Liverpool match, though Laurent Koscielny is the latest injury doubt at centre-back after picking up a knock in the draw with Brighton.

No update was given on Nacho Monreal (muscle), who also remains a concern for the trip to Anfield. Emery may play all three of Granit Xhaka, Lucas Torreira and Matteo Guendouzi in central midfield to give his backline extra protection for this daunting fixture, while Mesut Ozil looks a strong bet to drop out of the starting XI after a limp showing at the Amex.

Alexandre Lacazette could again be paired alongside Pierre-Emerick Aubameyang in attack, though his manager may instead decide to plump for Alex Iwobi or Aaron Ramsey in behind the Gabonese forward for this encounter. Ainsley Maitland-Niles could be used at right wing-back given the dearth of alternatives available, meanwhile.

Klopp deployed a 4-2-3-1 in the win over Newcastle but highlighted the defensive problems that the system brings, so may switch back to a 4-3-3 for the visit of free-scoring Arsenal.

Emery will stick with his 4-2-3-1 meaning Lacazette will remain on the bench as he won’t want to risk going too top heavy against Liverpool’s superior midfield.

Arsenal will need to sit back, frustrate the Reds, and hope that their forwards are clinical enough to take what few chances will come their way and that their defenders are strong enough to hold on.

Both teams will come flying out of the gates as it’s a significant match in both sides’ season, Liverpool with the title, and Arsenal with the top four.

Liverpool have a significant advantage in the strength of our midfield, and being at home, this issue will be even further highlighted. This is where the game will ultimately be won and lost.

Liverpool take on Rafa Benitez’s Newcastle at Anfield in a game that will surely be an unusual one for the ex Liverpool manager.

He’s obviously a professional and would never deliberately throw a game just to do Liverpool fans a favour, but part of him must be excited about how Liverpool are going this season, and therefore trying to bring it to a halt must feel bizarre.

Nevertheless, Newcastle are a strong side and will certainly be up for the match. The Reds will need to keep their heads down and get through another test.

TAA has returned to full training and could play against the Magpies. However, if Klopp is keen to keep him fresh for the big games against Arsenal and Manchester City, he could turn to one of either Clyne or Milner, although the latter reportedly has a tight hamstring.

Meanwhile, Keita has also returned to training following the superficial abdominal injury he sustained against Wolves. Klopp, as usual, has plenty of options in central midfield, which is perhaps the hardest area of the team to predict against Newcastle. Hendo, Gini, Fab, Lallana, and possibly Milner are all options.

Salah seems undroppable at the moment as he continues to outshine his attacking colleagues. Either one or both of Firmino or Mane could get a rest though with Shaq, Studge, or Origi perhaps the most likely to come in. 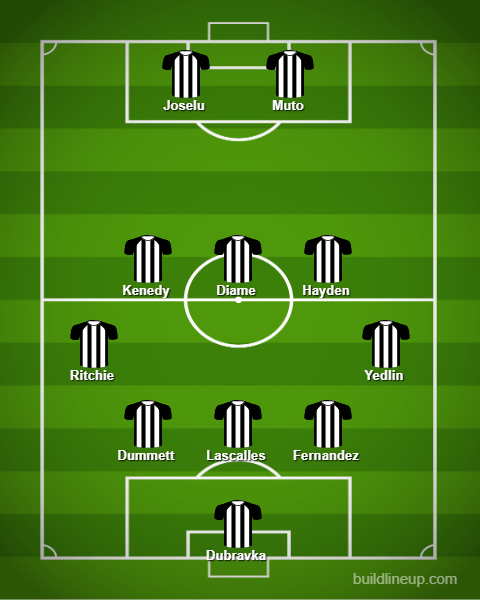 Ki Sung-Yueng has departed for the Asian Cup and Jonjo Shelvey is still a major doubt for the trip to Liverpool on Boxing Day, so Isaac Hayden may be handed a rare start in central midfield.

Along with Shelvey, Ciaran Clark, Karl Darlow, and Florian Lejeune are also in doubt. Kenedy could be handed a recall after being used only as a substitute against Fulham, while Ayoze Perez and Christian Atsu could potentially drop to the bench with a tactical alteration.

Jacob Murphy is another option out wide, while Joselu could be handed a run-out up front if the Newcastle manager wishes to preserve Salomon Rondon’s legs for more ‘winnable’ matches over the festive period.

Benitez has used a 5-4-1 in matches against the ‘big six clubs’ this season, and it wouldn’t be a huge surprise to see him use this formation again, with Federico Fernandez perhaps returning to central defence and Paul Dummett moving over to left-back.

Liverpool will be taking the same approach into this game as they have with every other. They’ll be calm but decisive on the ball, as well as alert and disciplined without it.

Rafa’s boys will have their work cut out for them, but they do have the pace and power in key areas to trouble any team when everything clicks.

Newcastle will sit back as deep as they can without the ball and look to soak up as much pressure as possible before lumping the ball forward quickly in search of fouls and set-pieces.

Liverpool on the other hand will take their time looking for the key that will ultimately unlock the visitors’ defence.

Once the first goal goes in though, Liverpool will take full control and easily walk away as 3-0 winners.

Top Spot up for Grabs

Liverpool take on Wolves in the last game of the season before Christmas, and a win would secure top spot by at least one point depending on the result at Manchester City.

The significance of that is generally the team who’s on top at Christmas goes on to lift the trophy in May, but Klopp’s men can’t afford to think any further ahead than one game at a time.

Wolves are a tough side, as both City and Chelsea found out earlier in the season. This will be a strong test of Liverpool’s focus and determination. 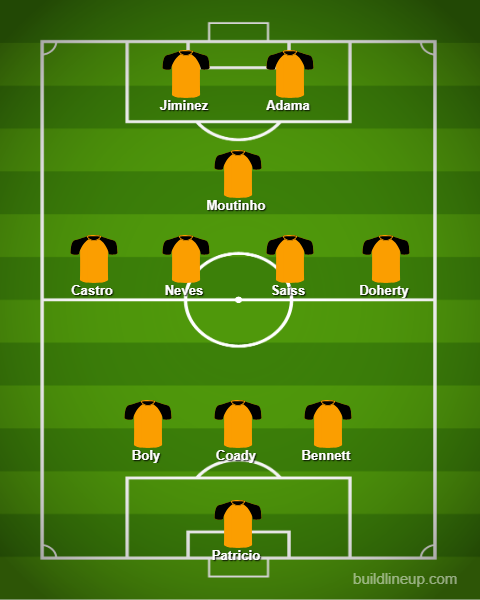 It was well known that Bright Enobakhare and Danny Batth would miss the Liverpool game, but now Diogo Jota has also been ruled out.

This opens up an attacking slot for one of Ivan Cavaleiro, Helder Costa, or Adama Traore alongside Raul Jimenez.

Jonny made a surprise early return from a knee injury in the win over Bournemouth and looks set to continue at left wing-back, where Ruben Vinagre is another option. Leander Dendoncker also offers fresh legs in central defence or midfield. 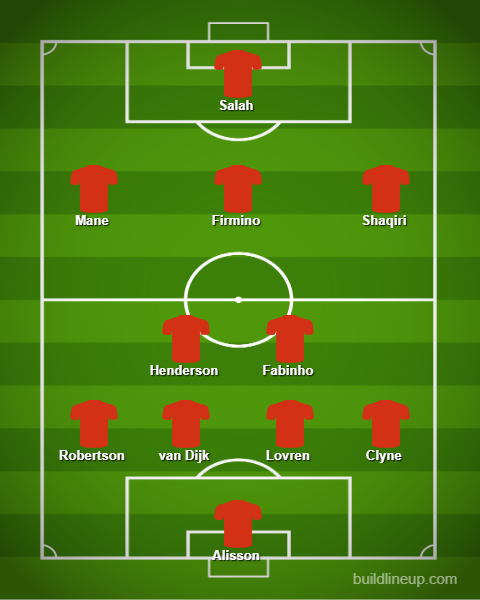 Alexander-Arnold looks set to have some involvement over the Christmas period as his injury is not as bad as first feared, but Klopp admitted in his press conference on Tuesday that the Wolves game would probably come too soon for him.

Nathaniel Clyne’s performance against Manchester United will certainly put him in the frame to deputise once again, but James Milner is confident of recovering in time to be in contention for the trip to Molineux.

We are now entering into the period where rotation could see the likes of Alberto Moreno coming in for Andrew Robertson, although whether Klopp would deploy the Spaniard against an in-form Matt Doherty is another question.

Wolves come into this game on the back of a three-game winning run so changes may be avoided, though Romain Saiss could be brought into central midfield if Nuno Espirito Santo wishes to add more steel to the centre of the park.

Central midfield is where the real wealth of options are for Klopp. Hendo could come back into the line-up there, as could Milner, with Wijnaldum, Keita and Fabinho.

Again, Klopp has the options to rest key players in attack but may prefer a stronger line-up away at Wolves than at home to Newcastle on Boxing Day. Shaqiri will be pushing for a start after his two deflected strikes sealed victory against Manchester United.

Wolves like to play fast, attacking football without sacrificing solidity in the midfield or security at the back. This is why they are a genuinely formidable side.

The conditions could be poor on the night, so Klopp’s men will need to remain disciplined and be close to their best to walk away with a victory.

The Reds have repeatedly show that they’re capable of doing so, therefore, I’m predicting a 1-0 win to take us into Christmas.